As part of the 2013-14 State Budget Update, the Victorian Government announced that the congestion levy boundary would be expanded in the biggest and most sweeping changes since the congestion levy’s introduction in 2006. The Victorian State Revenue Office’s controversial Congestion Levy (Parking Tax) will expand with a Category 2 area to come into effect from 1st January 2015.

The new area is not only larger than the initial “CBD” area, but includes areas that are simply non-commercially viable and will in turn effect paid parking areas, potentially converting them into free parking areas to simply avoid paying the levy. This certainly won’t kerb congestion, pollution or raise the expected revenue the government seeks from this new action.

The new Category 2 area will be levied at a “concessional” of $950 per space, while the levy on the current Category 1 spaces has already increased from $960 to $1,300 per space on 1st January 2014. These changes have a huge impact on the economic viability of not only the car parks imposed with the levy in these areas, but on commercial and retail business, as the cost of doing business will rise an estimated $1,300 per staff member P.A. and parking rates will need to be increased to support the new tax.

Adjusted levy amounts are released in November each year, indexed annually for CPI. 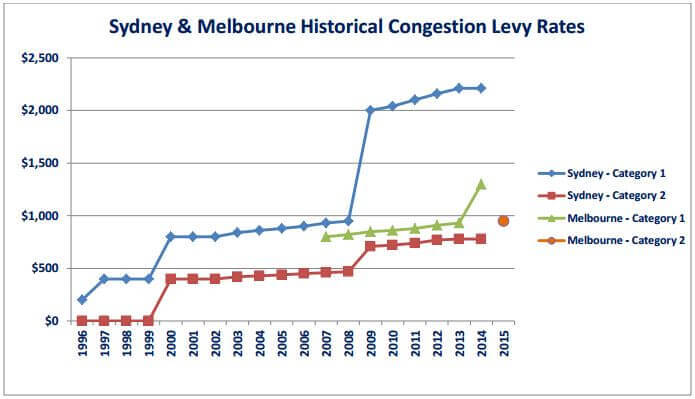 Currently, money collected by the Congestion Levy (parking tax) is placed into consolidated revenue for the State Government and is meant to be reinvested back into public transport infrastructure. However, there is no link between the revenue and investment in schemes to reduce traffic congestion through investment in walking, cycling and public transport or even sustainable transportation initiatives.

If the government was serious about even one of these goals, it would include on-street parking as a leviable parking space. However its sole focus is on that of off-street parking, which is counter to a recent statement by Minister for Roads, Terry Mulder, “Relocating on-street parking to off-street areas is an efficient way to relieve congestion” and he continued to state, “A single parked car on Punt Rd can reduce two lanes of traffic to one, causing congestion to spill into neighbouring areas.”

So, if on-street parking can cause such congestion, why would these parking spaces not fall under the levy? 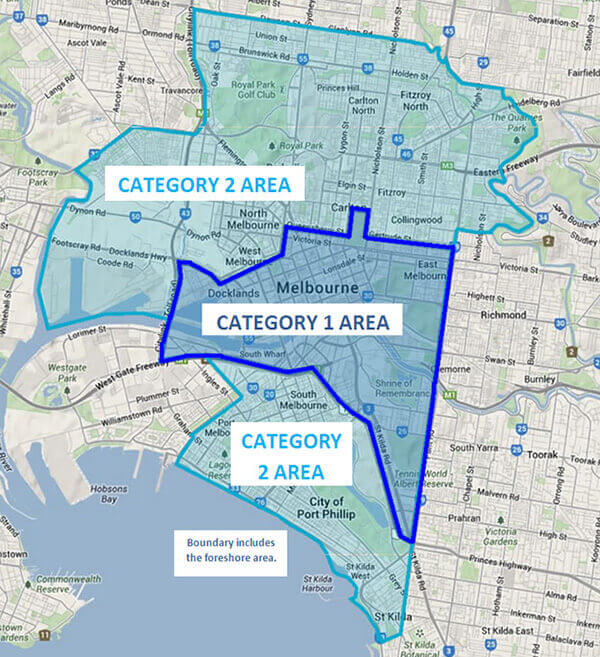 Category 2 levy area is the new and highly contentious area bounded by the light blue lines on the map. These areas are divided into two, north and south of the existing category 1 area.

The south category 2 levy area extends all the way to the St Kilda foreshore and Port Phillip Bay, bounded on the east by Hoddle St/Punt Rd/Nepean Hwy, Barkly St and to the west Princes St, Station St, Boundary St to the West Gate Freeway/Citylink.

The north category 2 levy area extends right into Brunswick East at Dawson St/Glenlyon Rd. It is bounded to the east by Merri Creek, Yarra River, Gipps St and Hoddle St and on the west by Citylink, then out into Flemington along Racecourse Rd to follow the Maribyrnong River and then the Yarra River back to area 1.

Previously the congestion levy provided concessions of 25% and exceptions on spaces such as short-term parking, however these have been removed in the recent announcement and the following now applies:

The Levy generally applies to all non-residential off-street parking spaces with the following spaces broadly exempt from the levy:

The State Revenue Office’s Customer Education Unit conducted free online webinars on 21st October and 6th- 20th November (Monday, Tuesday and Thursday’s) 2014 to explain the recent legislative changes to the congestion levy and the impact it will have to car park owners.  The webinar sessions have now finished.

What the webinars covered?

A comprehensive and interactive webinar covering the recent legislative amendments to the Congestion Levy Act 2005 and the impact on car parks in the Category 2 levy area. Some of the topics covered in the webinar are:

By now, most owners of any land/premises/building that has any form of parking, should have received a letter from the State Revenue Office outlining:

You can view a sample copy of the SRO Congestion Levy letter here.

What if you haven’t had any correspondence from the SRO?
If you are within the congestion levy area and have a parking space (even if you are exempt), it is our recommendation that you contact the SRO – cgl@sro.vic.gov.au

A full and detailed boundary list can be found on the State Revenue Office Victoria website, this link also provides an interactive map.

Until last week, state schools in many inner suburbs were subject to the levy. But the Victorian government ordered the Education Department to foot the bill instead.

The RACV general manager of public policy, Brian Negus said the levy was ineffective. “This is just a further tax on top of the motoring taxes that everyone pays,” he said.

Whilst not all of these car parks are in the levy area, for those that are, we pose the question – So why are hospitals exempt from the Congestion Levy, when they are creating congestion and clearly running a profitable car park facility?  Our only concern would be patients paying more.

Councils call for parking congestion levy to be returned to councils – Herald Sun, 27th October 2014 – Online Article
The Municipal Association of Victoria asks the State Government to give back 15% of the money raised from the levy, which was introduced for the City of Melbourne in 2005.  Yarra, Moreland, Port Phillip, Darebin and some parts of Moonee Valley are to be incorporated in the levy area from next year.  Council have “grave concerns” about the impacts the extended congestion levy could have on community life, says Yarra Mayor Jackie Fristacky.

Melbourne advised to impose congestion toll to cut traffic – Herald Sun, 2nd June 2014 – Online Article
An alternate to the existing congestion levy is proposed in this article through an additional fee to toll road charges.

Car parking costs in Melbourne CBD soar with more increases on the way – Herald Sun, 10th September 2013 – Online Article
The effects on commercial parking prices and what it means to motorists.

Congestion Levy fails to solve traffic gridlock, researchers say – Herald Sun, 16th August 2012 – Online Article
Discussing how much we have paid since the inception of the levy and how the system is not transparent it is open to rorting by governments that may be spending the money on other inappropriate initiatives.